See how UCERIS tablets may help get your patients back in remission.

Get the latest updates about UCERIS tablets. 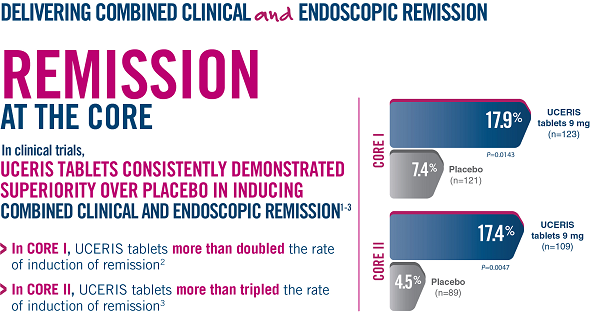 Studies that include the stringent endpoint of endoscopic remission as the definition of remission, like the CORE studies, have been found to have lower placebo response rates.4

The efficacy of UCERIS tablets was assessed in two randomized, double-blind, placebo-controlled studies. The studies were conducted in a total of 970 adult patients with active, mild to moderate ulcerative colitis (UC).1,5

Patients beginning the CORE studies had1,5 :

Study design: Two randomized, double-blind, placebo-controlled studies were conducted in a total of 970 adult patients with active, mild to moderate UC (UCDAI: ≥4 and ≤10 at entry). The primary endpoint was induction of combined clinical and endoscopic remission (defined as a UCDAI score of ≤1, with subscores of 0 for both rectal bleeding and stool frequency, normal mucosa with no friability on endoscopy, and a ≥1-point reduction in the EI score) after 8 weeks of treatment.1,5

†UCDAI is a four-component scale (total score of 0 to 12) that is composed of clinical assessments of stool frequency, rectal bleeding, mucosal appearance, and physician' s rating of disease activity, with subscores of 0—3 for each component.6

‡EI is a four-component scale (total score of 0 to 12) composed of granulation, vascular pattern, vulnerability of mucosa, and mucosal damage.7

The CORE studies utilized a combined primary endpoint, requiring both clinical and endoscopic remission at week 8.

UCERIS® (budesonide) extended release tablets are a glucocorticosteroid indicated for the induction of remission in patients with active, mild to moderate ulcerative colitis.

You are now leaving www.uceris.com

Thank you for visiting www.uceris.com. By clicking OK you will be taken to a website or sites to which our Privacy Policy and other rules do not apply. Salix Pharmaceuticals does not possess editorial control over the content of the information provided in such website(s) and therefore does not warrant their accuracy and completeness. You are solely responsible for interactions with such website(s).