Find out how UCERIS tablets are dosed.

Get the latest updates about UCERIS tablets.


A BUDESONIDE WITH MMX® TECHNOLOGY

Budesonide has up to 90% first-pass metabolism, and no clinically significant differences were observed with respect to the overall percentages of patients with any glucocorticoid-related effects between UCERIS and placebo after 8 weeks of induction therapy.1 However, since UCERIS tablets are a glucocorticosteroid, general warnings concerning glucocorticoids should be followed.

The clinical effect of drug delivery on outcome is unknown.

UCERIS tablets are enteric coated to resist dissolution in the stomach, and do not dissolve until exposure to pH ≥7 in the terminal ileum of the small intestine. After reaching the colon, the tablet matrix expands, forms a hydrogel, and provides extended release of budesonide in a time-dependent manner. UCERIS tablets have been detected by scintigraphic imaging in the ascending colon between 4 and 24 hours after dosing.1,3

The efficacy of UCERIS tablets was assessed in two randomized, double-blind, placebo-controlled studies. The studies were conducted in a total of 970 adult patients with active, mild to moderate UC.1,4 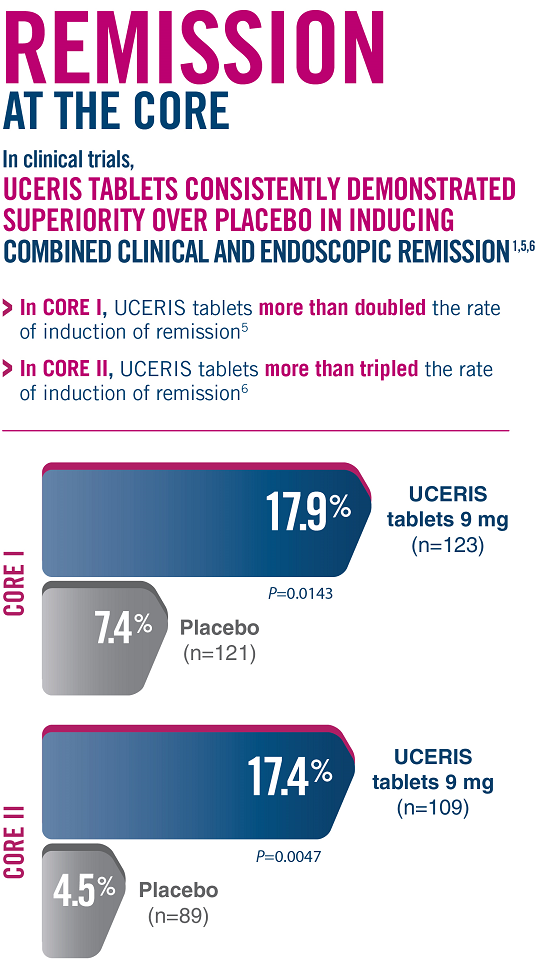 UCERIS extended release tablets are contraindicated in patients with hypersensitivity to budesonide or any of the ingredients of UCERIS.

Two similar drug trials studied a total of 970 adult patients with active, mild to moderate UC. Each trial consisted of 2 groups: one group was given UCERIS tablets and the other was given sugar pills (placebo). Participants had an Ulcerative Colitis Disease Activity Index (UCDAI) score that was equal to or higher than 4, but less than or equal to 10. UCDAI measures UC with a total score of 0 to 12, based on frequency of bowel movements, rectal bleeding, appearance of the colon, and the physician’s rating of disease activity. Remission was defined as a UCDAI score of less than or equal to 1.1,4

Profile of steroid-related safety at 8 weeks1†

†In a pooled analysis of 2 Phase III clinical trials.

Since UCERIS tablets are a glucocorticosteroid, general warnings concerning glucocorticoids should be followed.

Study design: Two randomized, double-blind, placebo-controlled studies were conducted in a total of 970 adult patients with active, mild to moderate UC (UCDAI: ≥4 and ≤10 at entry). The primary endpoint was induction of combined clinical and endoscopic remission (defined as a UCDAI score of ≤1, with subscores of 0 for both rectal bleeding and stool frequency, normal mucosa with no friability on endoscopy, and a ≥1-point reduction in the EI score) after 8 weeks of treatment.1,4

UCERIS® (budesonide) extended release tablets are a glucocorticosteroid indicated for the induction of remission in patients with active, mild to moderate ulcerative colitis.

You are now leaving www.uceris.com

Thank you for visiting www.uceris.com. By clicking OK you will be taken to a website or sites to which our Privacy Policy and other rules do not apply. Salix Pharmaceuticals does not possess editorial control over the content of the information provided in such website(s) and therefore does not warrant their accuracy and completeness. You are solely responsible for interactions with such website(s).